CONCERNED ABOUT THE AFFECTS OF RITALIN? 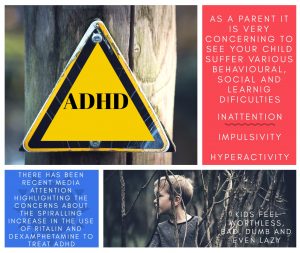 CONCERNED ABOUT THE AFFECTS OF RITALIN?
There has been recent media highlighting the concerns about the spiralling increase in the use of Ritalin and Dexamphetamine to treat ADHD (Attention Deficit Hyperactive Disorder). Especially in young children, despite Ritalin NOT being approved for children below 6 years of age.
But what do you do? As a parent it is very concerning to see your child suffer various behavioural, social and learning difficulties
Many parents are worried about the potential adverse effects from Ritalin or Dexamphetamine and that they may become dependant on these medications. Also the concern that they are not addressing the underlying functional disturbances present in ADHD that often leads to lifelong use of these medicines
However there is now much known about the factors causing ADHD and that the following play a big role in ADHD
1. Sensitivities and reactions to artificial food colours, flavours and preservatives
2. Food intolerances
3. Nutritional deficiencies
4. Gastro-intestinal disturbances
5. Social environment
As Naturopaths, we can play a big role in correcting these first 4 factors
AVOID SYNTHETIC CHEMICALS, FOOD ADDITIVES
Many studies have shown eliminating various food additives (preservatives including benzoates, nitrate, metabisulphite and propionic acid, azo dyes, synthetic antioxidants, MSG ) can produce large improvements in behaviour in kids of all ages, in those with clinically diagnosed ADHD and even those without!
Symptoms such as hyperactivity, irritability, restlessness, inattention and sleep disturbances have all responded well to avoiding exposure to these chemicals
Even brewers’ yeast has been shown to exacerbate symptoms in ADHD!
My experience has shown that susceptibility to these chemicals provide me with a pathway to understanding effective treatment. By eliminating exposure and improving your ability to metabolise these chemicals, sustained improvements can be seen quickly
Also eliminating certain foods containing gluten, dairy and those high in salicylates (tomatoes, apples, sultanas, avocado, kiwi fruit, berries, capsicum, almonds) can lead to significant improvements in the symptoms of ADHD
EAT CHEMICAL-FREE REAL FOOD
One 14 year study showed the detrimental effect of eating a typical “western diet”. Published in the Journal of Attention Disorders 2011; 15(5) 403-411. Titled: ADHD is associated with a “western” dietary pattern in Adolescents .
The study showed the risk of developing ADHD from eating a standard western diet was more than double and that eating a healthy diet was not associated with ADHD . This represents a powerful, side effect free way of improving ADHD
IMPROVE NUTRITION
Various nutritional therapies can be effective in improving ADHD by correcting deficiencies that are exist as part of the underlying problem
Ritalin and Dexamphetamine exert their effects by increasing the neurotransmitter dopamine. This then binds to a Dopamine receptor at an adjacent neuron (nerve cell). It has been shown that being deficient in omega 3 fatty acids (DHA – the good oils, from fish especially) leads to less dopamine receptors being available to receive the released dopamine (along with other important receptors)
Although the research has shown variable benefits of DHA supplementation, my experience highlights the benefit of combining DHA with other nutrients (Zinc, magnesium, Selenium, Folic acid and Vitamin B12). These nutrients assist in assimilating DHA and improving brain neurotransmitter regulation and inflammation
Various studies have shown this enhanced effect of combining DHA (good oils) with various minerals and vitamins in treating other conditions where DHA would be expected to be beneficial.
RESTORE BOWEL HEALTH
Gastro-intestinal disorders are more common in conditions such as ADHD. Conditions such as IBS most likely contribute to symptoms of ADHD. Many ADHD sufferers experience intestinal pain and distress, discomfort, diarrhoea, nausea or constipation
In fact, overgrowth of certain bacteria can lead to the production of various irritating chemicals, in the bowel including amines, excess neurotransmitters and even ethanol.
Addressing these gastrointestinal disturbances if present can have a big impact of the symptoms of ADHD.
Understanding of the factors causing and influencing ADHD has certainly increased in the last decade or two, but the influence of chemical additives has been known for almost 40 years.
GET A NATUROPATH TO PUT IT ALL TOGETHER
As a naturopath, I provide a non-drug plan to
1. Avoid processed foods (and their chemicals) , foods high in salicylates
2. Correct nutrient deficiencies
3. Improve bowel health
4. Restore detoxification pathways to full functioning
These can all be combined safely with any prescribed medication
Treatment length will vary depending on how long the symptoms of ADHD have been present.
Contact me today on 8271-1827 or 0414 431467 to book an appointment
Regards
Craig Wainwright