BINGE DRINKING AND THE RISKS….. 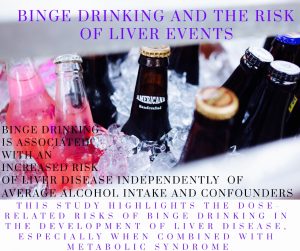 Binge Drinking and the Risk of Liver Events

BACKGROUND & AIMS
Binge drinking or heavy episodic drinking is increasingly prevalent, but the health effects are incompletely understood. We investigated whether binge drinking increases the risk for liver disease above and beyond the risk due to average alcohol consumption.
METHODS
6366 subjects without baseline liver disease who participated in the Finnish population-based Health 2000 Study (2000-2001), a nationally representative cohort. Follow-up data from national registers until 2013 were analysed for liver-related admissions, mortality and liver cancer. Binge drinking (≥5 drinks per occasion, standard drink 12 g ethanol) was categorised as weekly, monthly, or as less often or none. Multiple confounders were considered.
RESULTS
Eighty-four subjects developed decompensated liver disease. Binge drinking frequency showed a direct association with liver-disease risk after adjustment for average daily alcohol intake and age. After adjustment, the hazard ratios for weekly and monthly binge drinking were 3.45 (P=.001) and 2.26 (P=.007) and were higher after excluding regular heavy drinkers. The hazard ratios for weekly binging was 6.82 (P=.02) in women; 2.34 (P=.03) in men; and 4.29 (P=.001) in subjects with the metabolic syndrome. Weekly binge drinking and the metabolic syndrome produced supra-additive increases in the risk of decompensated liver disease. Weekly, and to a lesser extent monthly, binging retained significance in sequential multivariate models that additionally adjusted for beverage preference and lifestyle, metabolic, and socioeconomic factors.
CONCLUSIONS
Binge drinking is associated with an increased risk for liver disease independently of average alcohol intake and confounders. The rising prevalence of binge drinking and the metabolic syndrome is particularly concerning.
TAKE-HOME MESSAGE
* This Finnish cohort study followed more than 6000 adult patients over a mean period of 11 years. Binge drinking was defined as ≥5 drinks containing 12 g of ethanol per occasion, and had a marked association with decompensated liver disease (hospitalization due to liver disease, liver-related death, or diagnosis of primary liver cancer) after adjustment for age and average daily alcohol use. The hazard ratios for weekly binging and monthly binging were 3.45 and 2.26, respectively. In patients with metabolic syndrome, weekly binging had a synergistic effect (hazard ratios rising to 4.29) for development of decompensated liver disease.
* This study highlights the dose-related risks of binge drinking in the development of liver disease, especially when combined with metabolic syndrome.
– Zurabi Lominadze, MD
At Botanica Medica our Naturopaths are well aware of the importance of exercise, a good diet and the effect it can have on your life both physically and mentally, this can be even more so with people who have Metabolic Syndrome . They come across lots of interesting studies and are always updating their knowledge. If you would like to make an appointment with one of our Naturopaths call Botanica Medica on 8271-1827 today. They are only to happy to share the knowledge they have gained through their studies and patient outcomes, and get you feeling better. Botanica Medica is located at 97 Glen Osmond Road, Eastwood and appointments are available Monday to Saturday including some after hours.
Liver International: Official Journal of the International Association for the Study of the Liver