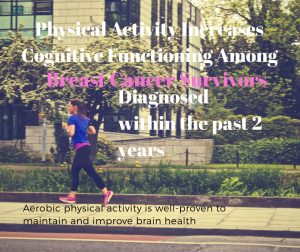 * This study was designed to evaluate the effects of an exercise program on cognition among 87 sedentary breast cancer survivors. Patients in the exercise arm experienced significantly improved processing speed compared with patients in the control arm. Although not statistically significant, self-reported cognition was also increased in the exercise arm. Within the exercise arm, greater physical activity was associated with improved objective and self-reported cognition.
* The exercise intervention significantly improved processing speed, although only among patients diagnosed with breast cancer within the past 2 years, suggesting that the earlier the implementation of an exercise program following diagnosis, the better.
Breast cancer patients often complain of cognitive difficulties related to diagnosis and treatment, but clinicians rarely have interventions to offer. Patients come to their physicians for answers and guidance, yet vague, global complaints such as “I can’t remember anything” or “I can’t seem to focus” are difficult to quantify and therefore more difficult to treat or even recognize as a true issue for the patient.
Aerobic physical activity is well-proven to maintain and improve brain health. In this study, the authors have performed the first completed, randomized controlled trial among cancer survivors testing the impact of increasing physical activity on both objective measures and self-reported measures. Breast cancer patients within 5 years of their diagnosis were randomized to an exercise intervention arm or control arm. Regardless of the patient’s age or cancer treatment, including endocrine therapy, patients in the exercise arm had significantly greater improvements in the cognitive domain of processing speed. Processing speed plays a central role in cognition and can impact other cognitive tests. Patients within the first 2 years of their diagnosis had a greater benefit, suggesting that earlier intervention is better. The exercise guideline for cancer survivors from the American College of Sports Medicine was used with a goal for patients to have 150 minutes per week of moderate to vigorous physical activity.
Although there are limitations to the study, the results offer the clinician specific recommendations for their patients with proven outcomes.
BACKGROUND
Increasing physical activity can improve cognition in healthy and cognitively impaired adults; however, the benefits for cancer survivors are unknown. The current study examined a 12-week physical activity intervention, compared with a control condition, on objective and self-reported cognition among breast cancer survivors.
METHODS
Sedentary breast cancer survivors were randomized to an exercise arm (n = 43) or a control arm (n = 44). At baseline and at 12 weeks, objective cognition was measured with the National Institutes of Health Cognitive Toolbox, and self-reported cognition using the Patient-Reported Outcomes Measurement Information System scales. Linear mixed-effects regression models tested intervention effects for changes in cognition scores.
RESULTS
On average, participants (n = 87) were aged 57 years (standard deviation, 10.4 years) and were 2.5 years (standard deviation, 1.3 years) post surgery. Scores on the Oral Symbol Digit subscale (a measure of processing speed) evidenced differential improvement in the exercise arm versus the control arm (b = 2.01; P < .05). The between-group differences in improvement on self-reported cognition were not statistically significant but were suggestive of potential group differences. Time since surgery moderated the correlation, and participants who were ≤2 years post surgery had a significantly greater improvement in Oral Symbol Digit score (exercise vs control (b = 4.00; P < .01), but no significant improvement was observed in patients who were >2 years postsurgery (b = -1.19; P = .40). A significant dose response was observed with greater increased physical activity associated with objective and self-reported cognition in the exercise arm.
CONCLUSIONS
The exercise intervention significantly improved processing speed, but only among those who had been diagnosed with breast cancer within the past 2 years. Slowed processing speed can have substantial implications for independent functioning, supporting the potential importance of early implementation of an exercise intervention among patients with breast cancer.
At Botanica Medica our Naturopaths are well aware of the importance of  exercise, a good diet and the effect it can have on your life both physically and mentally. They come across lots of interesting studies and are always updating their knowledge.
If you would like to make an appointment with one of our Naturopaths call Botanica Medica on 8271-1827 today. They are only to happy to share the knowledge they have gained through their studies and patient outcomes, and get you feeling better. Botanica Medica is located at 97 Glen Osmond Road, Eastwood and appointments are available Monday to Saturday including some after hours.
Randomized controlled trial of increasing physical activity on objectively measured and self-reported cognitive functioning among breast cancer survivors: The memory & motion study
First published: 19 September 2017
DOI: 10.1002/cncr.30987
Cited by (CrossRef): 0 articles Check for updates Citation tools
Jeffrey Wiisanen, MD
And
Oncology
Written by
Sylvia Richey MD
Artwork via Canva app