Chlamydia Infection Is Associated With Increased Risk Of Ovarian Cancer 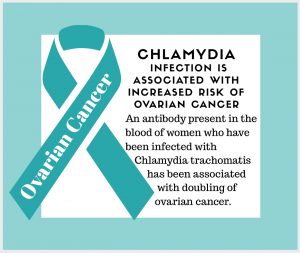 April 1, 2018—Philadelphia, Pennsylvania—An antibody present in the blood of women who have been infected with Chlamydia trachomatis has been associated with doubling of ovarian cancer risk.
This finding of an examination of data from 2 studies will be reported at the American Association of Cancer Research (AACR) Annual Meeting, in Chicago from April 14 – 18.
Britton Trabert, PhD, MS, of the National Cancer Institute, Bethesda, Maryland, explained that chlamydia is the most commonly reported sexually transmitted bacterial infection in the US. Dr. Trabert and colleagues set out to examine possible connections between chlamydia and ovarian cancer.
Primary infection with chlamydia is often asymptomatic and may persist for several months or years, thus ascertainment of pelvic inflammatory disease in epidemiologic studies is challenging due to pervasive misclassification and underreporting.
Dr. Trabert said, in an AACR press release, “Ovarian cancer is a relatively rare cancer, but women who get it face poor survival rates. We need to understand more about what causes ovarian cancer so we can improve screening and treatment, and ultimately, improve survival rates.”
Research has shown that pelvic inflammatory disease, often caused by sexually transmitted infection, is associated with ovarian cancer. Other studies, however, have not found a link between sexually transmitted infections and ovarian cancer.
The researchers examined data from two different studies: a Polish study of 278 women diagnosed with ovarian cancer between 2000 and 2003, and 278 matched controls; and the National Cancer Institute-sponsored Prostate, Lung, Colorectal, and Ovarian Cancer Screening Trial, a nested case-control study with blood draw prior to diagnosis. The latter trial included 160 women who developed ovarian cancer during follow-up and 159 matched controls.
Using logistic regression, they calculated odds ratios for the association between chlamydia antibodies and ovarian cancer risk.
The odds ratio of positivity for the chlamydia plasmid-encoded Pgp3 protein was associated with increased ovarian cancer risk in the Polish study [odds ratio (95% confidence interval) 1.63 (1.20 – 2.22)].
When a positive result was redefined at a higher titer, ovarian cancer risk increased [cut point 2: 2.00 (1.38 – 2.89); cut point 3 (max odds ratio) 2.19 (1.29 -3.73)]. All other chlamydia markers measured were associated with increased risk at the more stringent positivity threshold in Poland.
In the prospective Prostate, Lung, Colorectal and Ovarian Cancer Screening Trial, Pgp3 was associated with elevated risk at the laboratory cut point [1.43 (0.78 – 2.63)]. Using higher thresholds, Pgp3 was associated with increased ovarian cancer risk [cut point 2: 2.25 (1.07 – 4.71); cut point 3: 2.53 (0.63 – 10.08)].
In summary, in both study populations, women who harbored antibodies against pgp3, a protein considered a highly accurate marker of active or prior chlamydia infection, were approximately twice as likely to have also been diagnosed with ovarian cancer.
Dr. Trabert pointed out that the studies also evaluated antibodies against several other infectious agents, including human papillomavirus, herpes simplex virus, hepatitis B, and hepatitis C.
They found no association of these infections with increased ovarian cancer risk. Dr. Trabert said, “The fact that there were no associations with antibodies against other infectious agents really supports the specificity of the association of chlamydia infection with ovarian cancer.”
Dr. Trabert said the next step will be to confirm the findings in larger populations, and to determine whether chlamydia infection is tied more specifically to certain subtypes of ovarian cancer. For example, research has demonstrated an association between inflammation, which can be caused by chlamydia infection, and risk of some subtypes of ovarian cancer.
The study’s most significant limitation was that the multiplex platform was not able to test reliably for antibodies to Neisseria gonorrhoeae, another known cause of pelvic inflammatory disease.
Dr. Trabert concluded that, though the findings need to be replicated, they suggest potential ovarian cancer risk reduction through targeted treatment of chlamydia infections.
At Botanica Medica our Naturopaths come across lots of interesting studies and are always updating their knowledge. If you would like to make an appointment with one of our Naturopaths call Botanica Medica on 8271-1827 today. They are only to happy to share the knowledge they have gained through their studies and patient outcomes, and get you feeling better. Botanica Medica is located at 97 Glen Osmond Road, Eastwood and appointments are available Monday to Saturday including some after hours.
Refrences
Published in Oncology
News · April 02, 2018
AACR 2018: Chlamydia Infection Is Associated With Increased Risk of Ovarian Cancer
PracticeUpdate Editorial Team
artwork created in Canva