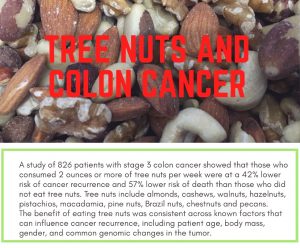 Patients With Colon Cancer Who Eat Tree Nuts Experience Nearly a 50% Reduction in Recurrence
May 17, 2017—Chicago, Illinois—A study of 826 patients with stage 3 colon cancer showed that those who consumed 2 ounces or more of nuts per week were at a 42% lower risk of cancer recurrence and 57% lower risk of death than those who did not eat nuts. A secondary analysis revealed that the benefit of nut consumption was limited to tree nuts. Tree nuts include almonds, walnuts, hazelnuts, cashews, and pecans to name a few.
Temidayo Fadelu, MD, of Dana Farber Cancer Institute, Boston, Massachusetts, said, “Numerous studies in heart disease and diabetes have shown the benefits of nut consumption, and we felt it was important to determine whether these benefits could also apply to patients with colorectal cancer.”
He continued, “Patients with advanced disease who benefit from chemotherapy frequently ask what else they can do to reduce their risk of recurrence or death. Results of our study are an important contribution to the idea that modifying diet and physical activity can be beneficial.”
It was interesting to note that no associated reduction in cancer recurrence or death was observed among patients who consumed peanuts or peanut butter. The reason may be that, as legumes, the metabolic composition of peanuts differs from that of tree nuts.
Peanuts are by far the most widely consumed nut in the US. Patients with stage 3 colon cancer are at a 70% likelihood of surviving 3 years after treatment, which typically includes surgery and/or chemotherapy. While numerous prior studies have examined diet as a potential cancer prevention tool, this was one of the first to assess the role of nut consumption and its influence on recurrence and mortality in colon cancer.
Dr. Fadelu and colleagues analyzed responses to a questionnaire from a Cancer and Leukemia Group B clinical trial of patients with stage 3 colon cancer that began in 1999. The questionnaire, which was administered after chemotherapy completion, inquired about dietary intake, including whether or not patients ate nuts and what types of nuts they consumed.
Researchers were particularly interested in nut consumption because such consumption has been linked to a lower incidence of obesity, type 2 diabetes, and a reduction in insulin resistance. These health conditions represent a state of excess energy and each was associated with a higher risk of recurrence and death from colon cancer.
The authors analyzed associations between overall nut consumption, and tree nut consumption only, and the risk of cancer recurrence and death. Patients who consumed 2 or more ounces of all types of nuts per week (19% of all patients in the study) were at a 42% lower risk of cancer recurrence and 57% lower risk of death than those who did not eat nuts after completing their cancer treatment.
The benefit of eating nuts was consistent across known factors that can influence cancer recurrence, including patient age, body mass index, gender, and common genomic changes in the tumor.
When examining at tree nut consumption only, the risk of recurrence was 46% lower and that of death, 53% lower for those who ate at least 2 ounces per week, than for those who did not. Given no significant reduction in cancer recurrence or death among patients who ate peanuts or peanut butter, the authors concluded that the benefit was likely limited to tree nuts. More research is needed to understand the lack of association with peanuts.
ASCO President Daniel F. Hayes, MD, FACP, FASCO, of the University of Michigan Comprehensive Cancer Center, Ann Arbor, concluded, “Basic healthy eating can often be overlooked during cancer treatment. Results of this study showed that something as simple as eating tree nuts may make a difference in a patient’s long-term survival. Nut consumption and a healthy diet are factors that clinicians and patients should perhaps pay attention to as they design their approach to treatment for colorectal cancer.”
He added, “It should be emphasized that the authors did not suggest that eating nuts should be considered a substitute for standard chemotherapy and other treatments for colon cancer, which have improved survival dramatically. Rather, patients with colon cancer should be optimistic, and they should eat a healthy diet, including tree nuts, which may not only keep them healthier, but may also further decrease their risk of cancer recurrence.”
Dr. Fadelu said, “We need to look at the potential positive impact of nut consumption on survival at other stages of colon cancer, particularly stage 4. Ultimately, we need to understand how nuts confer this protective effect, as well as to possibly conduct a randomized, controlled clinical trial in which diet recommendations are given at the start of the study to prove that tree nuts can reduce recurrence and death after treatment for colon cancer.”
As basic healthy eating can be overlooked when going through a health struggle it can be helpful to have someone in your corner who can help you stay on track. Our Naturopaths are constantly updating their knowledge on which healthy foods are beneficial to specific health problems, as well as which healthy foods may not be as advantageous to your condition. To have a Naturopath in your corner to help you with your condition phone today to get an appointment with either Tracey Cook or Craig Wainwright on 8271-1827. Botanica Medica is located as 97 Glen Osmond Road, Eastwood.
This finding of an observational study will be reported at the 2017 Annual Meeting of the American Society of Clinical Oncology (ASCO), from June 2 – 6.
Published in Oncology
News · May 18, 2017
Patients With Colon Cancer Who Eat Tree Nuts Experience Nearly a 50% Reduction in Recurrence
PracticeUpdate Editorial Team