IS ORGANIC FOOD WORTH IT?

Association of Frequency of Organic Food Consumption With Cancer Risk 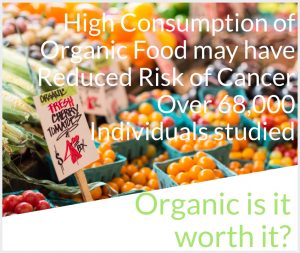 TAKE-HOME MESSAGE
* This study investigated the association between organic food consumption and the risk of cancer in France. Among 68,946 individuals included in the study, 1340 incident cancer cases were identified during follow-up, with the most prevalent being breast cancers, prostate cancers, skin cancers, colorectal cancers, non-Hodgkin’s lymphomas, and 15 other lymphomas.
* The study concluded that high consumption of organic food may be associated with a reduced risk of cancer. Further studies are needed to confirm these findings.
Is organic worth it?
It has been estimated that only 1% of the 85,000 chemicals produced by humans for humans have been studied for safety in humans. As is so often the case, the low economic rural areas often are at most risk. Recently, high levels of trichloropropane, a pesticide sprayed across agricultural fields in rural California, were found in the drinking water. You don’t have to be a scientist to realize that a chemical that kills one living thing is going to have a negative impact on other living things. A major concern is the declining bee population from overuse of pesticides. No bees mean no pollination; no pollination means badness.
Human exposure is also becoming a growing concern. Organic certified foods have a fraction of these chemicals compared with nonorganic products. This study in France asked 68,946 volunteers to respond to a questionnaire regarding their organic food consumption, and their incidence of cancer was followed over 7 years, from 2009 to 2016.
There are challenges with survey studies. One challenge is the fact that volunteers often have healthier habits than non-volunteers. And those who eat organic foods often have healthier eating habits than non-organic eaters. The researchers did their best to control for confounding variables and found that those who ate more organic foods had less cancer (HR, 0.92). The greatest reduction was in lymphoma and breast cancer.
In 2015, the International Agency for Research on Cancer recognized that the pesticides malathion, diazinon, parathion, and tetrachlorvinphos have human carcinogenic potential. The best recommendation we can make to reduce exposure to these carcinogens is to encourage consumption of foods that are grown organically.
Science lags behind business and profit. But, eventually, the truth wins out and doing the right thing in reducing human exposure to toxins becomes good business.
IMPORTANCE
Although organic foods are less likely to contain pesticide residues than conventional foods, few studies have examined the association of organic food consumption with cancer risk.
OBJECTIVE
To prospectively investigate the association between organic food consumption and the risk of cancer in a large cohort of French adults.
DESIGN, SETTING, AND PARTICIPANTS
In this population-based prospective cohort study among French adult volunteers, data were included from participants with available information on organic food consumption frequency and dietary intake. For 16 products, participants reported their consumption frequency of labeled organic foods (never, occasionally, or most of the time). An organic food score was then computed (range, 0-32 points). The follow-up dates were May 10, 2009, to November 30, 2016.  MAIN OUTCOMES AND MEASURES
This study estimated the risk of cancer in association with the organic food score (modeled as quartiles) using Cox proportional hazards regression models adjusted for potential cancer risk factors.  RESULTS
Among 68 946 participants (78.0% female; mean [SD] age at baseline, 44.2 [14.5] years), 1340 first incident cancer cases were identified during follow-up, with the most prevalent being 459 breast cancers, 180 prostate cancers, 135 skin cancers, 99 colorectal cancers, 47 non-Hodgkin lymphomas, and 15 other lymphomas. High organic food scores were inversely associated with the overall risk of cancer (hazard ratio for quartile 4 vs quartile 1, 0.75; 95% CI, 0.63-0.88; P for trend = .001; absolute risk reduction, 0.6%; hazard ratio for a 5-point increase, 0.92; 95% CI, 0.88-0.96).  CONCLUSIONS AND RELEVANCE
A higher frequency of organic food consumption was associated with a reduced risk of cancer. Although the study findings need to be confirmed, promoting organic food consumption in the general population could be a promising preventive strategy against cancer.
At Botanica Medica our Naturopaths are well aware of the importance of a good diet and the effect it can have on your life both physically and mentally. They come across lots of interesting studies and are always updating their knowledge. If you would like to make an appointment with one of our Naturopaths call Botanica Medica on 8271-1827 today. They are only to happy to share the knowledge they have gained through their studies and patient outcomes, and get you feeling better. Botanica Medica is located at 97 Glen Osmond Road, Eastwood and appointments are available Monday to Saturday including some after hours.
References
Published in Primary Care
Journal Scan / Research · October 31, 2018
Association of Frequency of Organic Food Consumption With Cancer Risk
JAMA internal medicine
Primary Care Written by David Rakel MD, FAAFP
Take home message written by Moshe Ornstein, MD
Artwork Created in Canva