Omega-3 long-chain polyunsaturated fatty acids have been shown to have an inverse association with aortic calcification a new study has reported. 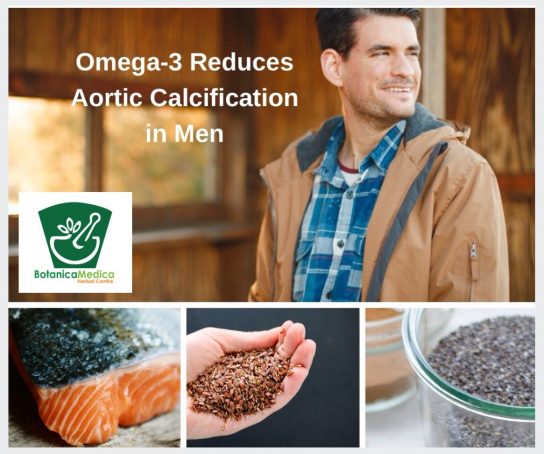 Published in the journal, Nutrition, Metabolism and Cardiovascular Diseases, the study found that in middle-aged men, blood levels of total omega-3s were significantly and inversely associated with aortic calcification ( Calcium deposits form on the aortic valve ) , independent of cardiovascular risk factors.
“This significant inverse association appeared to be driven by docosahexaenoic acid (omega 3 fatty acid, DHA) which was significantly and inversely associated with aortic calcification after adjustment of conventional cardiovascular risk factors and other fatty acids,” the authors said.
The population-based cross-sectional study of 1033 asymptomatic men aged 40-49 years examined the relationship of serum omega-3 to aortic calcification. Researchers found that 56.5% participants had an aortic calcification score (AoCaS) >0. The means (SD) of total omega-3, EPA, and DHA were 5.8% (3.3%), 1.4% (1.3%), and 3.7% (2.1%), respectively. In multivariable-adjusted Tobit regression, a 1-SD increase in total Omega-3, EPA, and DHA was associated with 29% (95% CI= 0.51, 1.00), 9% (95% CI= 0.68, 1.23), and 35% (95% CI= 0.46, 0.91) lower AoCaS, respectively.
The study found no significant interaction between race/ethnicity and omega-3, eicosapentaenoic acid (EPA) or DHA on aortic calcification. Researchers suggested that omega-3s may exert their anti-atherosclerotic effect through several anti-inflammatory pathways such as lowering the expression of nuclear factor k-B, regulators of inflammation and oxidative stress and improving endothelial function and increasing the atherosclerotic plaque stability.
“Our study shows a significant inverse association of DHA, but not of EPA, with aortic calcification. This finding concords with our previous observation of a significant inverse association of DHA but not of EPA with carotid intima-media thickness as well as the results of a prospective cohort study among postmenopausal women with coronary heart disease where DHA but not EPA was significantly associated with less progression of coronary atherosclerosis. Additionally, indirect evidence from short-term clinical trials in humans reported that DHA compared to EPA was more potent in lowering blood pressure, resting heart rate, the expression of pro-inflammatory cytokines, cell adhesion molecules, and monocyte adhesion to endothelial cells,” the authors explained.
According to the study, it is the first of its kind with findings having significant implications for public health; “Evidence generated from this study adds to the evidence on the anti-atherosclerotic property of omega-3s especially DHA in healthy middle-aged men. The findings of this study, if replicated in larger and longer follow-up studies, would help support intake of omega-3s policy in the general population,” the authors concluded.
At Botanica Medica our Naturopaths are well aware of the importance of  exercise, a good diet and the effect it can have on your life both physically and mentally. They come across lots of interesting studies and are always updating their knowledge. If you would like to make an appointment with one of our Naturopaths call Botanica Medica on 8271-1827 today. They are only to happy to share the knowledge they have gained through their studies and patient outcomes, and get you feeling better. Botanica Medica is located at 97 Glen Osmond Road, Eastwood and appointments are available Monday to Saturday including some after hours.
Source:
Nutr Metab Cardiovasc Dis. 2019 May 7. doi: 10.1016/j.numecd.2019.04.011
REFRENCES
Artwork created in Canva
Photo’s from Canva and UnsplashPhoto