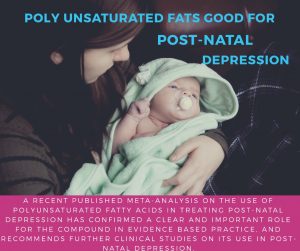 A recently published meta-analysis on the use of polyunsaturated fatty acids (PUFAs) in treating post-natal depression has confirmed a clear and important role for the compound in evidence based practice, and recommends further clinical studies on its use in post-natal depression.  The systematic-review and meta-analysis of 12 eligible studies compared the levels of PUFA indices – including eicosapentaenoic acid (EPA), docosahexanoic acid (DHA), arachidonic acid (AA), total omega-3, omega-6 and ratios of omega-6:omega-3 – between women with post-natal depression and healthy control subjects.
Results showed a significant but mild decrease in depressive subjects with higher levels of EPA (Effect Size [ES] = −0.18, p = 0.004) and DHA (ES = −0.35, p = 0.0002) and total omega-3s (ES = −0.51, p < 0.0001).  The levels of AA and total omega-6s were not significantly different and sensitivity analyses showed that the significant changes in the levels of EPA, DHA, and total omega-3 were not influenced by any single study and a linear regression analysis showed that there was no publication bias in each group of PUFA measurements.
In previous studies, it has been proposed that DHA is more important in brain functioning than EPA, however, EPA, rather than DHA, appears to be the effective component when treating clinical depression in published studies.
“The mechanism of the antidepressant effect of omega-3s has yet to be elucidated. It has been suggested that the abnormal cell membrane fatty acid composition may be of etiologic significance in depression,” the authors stated.
“Consistent with the theoretical relevance and findings from epidemiologic data and clinical trials, the abnormal fatty acid compositions in cell membranes in patients with mood disorders have been reported extensively and the findings of the differences in individual PUFAs between patients and control groups are inconsistent.”
The authors concluded that the levels of total omega-3s, DHA, and EPA are lower in patients with depression, implying that omega-3s play a role in the etiology of depression, “This provides further support to the phospholipid hypothesis of depression and a rationale for using omega-3s as an alternative treatment for patients with depression.”
“Because individual PUFAs may have different biological functions, this study might provide essential background to examine specific roles of DHA and EPA in the classification of depressive disorders in future studies.”
At Botanica Medica our Naturopaths come across lots of interesting studies and are always updating their knowledge. If you would like to make an appointment with one of our Naturopaths call Botanica Medica on 8271-1827  today. They are only to happy to share the knowledge they have gained through their studies and patient outcomes. Botanica Medica is located at 97 Glen Osmond Road, Eastwood and appointments are available Monday to Saturday including some after hours.
Source: Biol Psychiatry. 2017 Mar 9. pii: S0006-3223(17)31355-0. doi: 10.1016/j.biopsych.2017.02.1182. [Epub ahead of print]