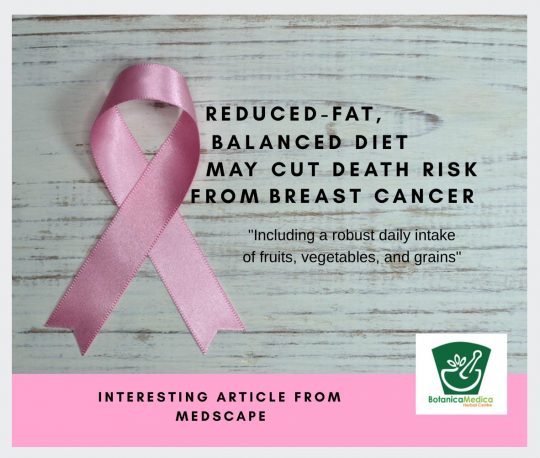 Long-term adherence to a reduced-fat diet that includes a robust daily intake of fruits, vegetables, and grains reduces the relative risk for death from breast cancer in postmenopausal women, according to investigators from the landmark Women’s Health Initiative (WHI) study.
“A dietary change can favourably influence a woman’s risk of dying from breast cancer,” summarized lead investigator Rowan Chlebowski, MD, PhD, Los Angeles Biomedical Research Institute, Harbor-UCLA Medical Centre, Torrance, California.
This is the first study that provides “randomized controlled trial evidence” that a dietary intervention can reduce the risk of dying from breast cancer, Chlebowski told reporters during a presscast that preceded the presentation of the study at the upcoming meeting of the American Society of Clinical Oncology (ASCO) in Chicago.
In the trial, 48,835 postmenopausal women (aged 50–79 years) who did not have breast cancer and whose intake of fat was about one third or higher of their total daily calories were randomly assigned to a usual-diet group or a dietary intervention group.
The goals of the intervention were to reduce fat intake to 20% of daily calories and to consume daily five servings of vegetables and fruit and six servings of grains.
This dietary intervention significantly reduced fat intake and increased fruit, vegetable, and grain intake. It resulted in a modest weight loss (3%) (for all, P < .001), the researchers report.
The dietary intervention lasted for a period of 8.5 years. During that time, there were 8% fewer breast cancers in the intervention group. Deaths from breast cancer were somewhat lower in the intervention group, but the rates were not significantly different, the researchers report. However, deaths after breast cancer (ie, breast cancer followed by death from any cause) were significantly reduced in the intervention group, both during the 8.5 years of intervention and the cumulative follow-up period.
At the presscast, Chlebowski focused on these new results from the longer follow-up. The median follow-up was 19.6 years, during which there were 3374 incident cases of breast cancer among all participants. Among the intervention group, there was a statistically significant 21% lower risk for death from breast cancer (breast cancer followed by death attributed to the breast cancer) compared to the usual-diet control participants (hazard ratio [HR], 0.79; 95% confidence interval [CI], 0.64 – 0.97).
Additionally, there was a significant 15% reduction in deaths from all causes after a breast cancer diagnosis in the intervention group (HR, 0.85; 95% CI, 0.74 – 0.96).
Lidia Schapiro, MD, Stanford University, California, who was co-moderator of the presscast, said the prevention study was “very important,” despite the fact that the intervention group did fully achieve the dietary fat-reduction goal of 20% (most women reduced daily consumption to 25% or less of all calories). Clinicians should encourage postmenopausal women “to put fruits, vegetables, and grains on their plates,” she said.
At Botanica Medica our Naturopaths are well aware of the importance of  exercise, a good diet and the effect it can have on your life both physically and mentally. They come across lots of interesting studies and are always updating their knowledge. If you would like to make an appointment with one of our Naturopaths call Botanica Medica on 8271-1827 today. They are only to happy to share the knowledge they have gained through their studies and patient outcomes, and get you feeling better. Botanica Medica is located at 97 Glen Osmond Road, Eastwood and appointments are available Monday to Saturday including some after hours.
REFRENCES:
Medscape Medical News > Conference News > ASCO 2019
Reduced-Fat, Balanced Diet May Cut Death Risk From Breast Cancer Nick Mulcahy May 16, 2019
Artwork created in Canva