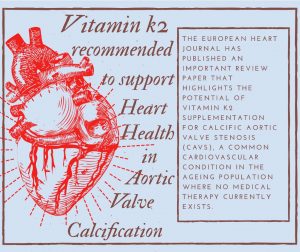 VITAMIN K2 RECOMMENDED TO SUPPORT HEART HEALTH IN AORTIC VALVE CALCIFICATION
The European Heart Journal has published an important review paper that highlights the potential of Vitamin K2 supplementation for calcific aortic valve stenosis (CAVS), a common cardiovascular condition in the aging population where no medical therapy currently exists.
According to researchers, once symptomatic severe calcific aortic valve stenosis has developed, the prognosis without intervention is dismal. Currently the only treatment for (symptomatic) severe calcific aortic valve stenosis is surgical or trans catheter aortic valve replacement (AVR), to which not all patients are suited. While multiple trials have attempted to repurpose commonly used pharmacological interventions to slow calcific aortic valve stenosis progression, pharmacological interventions have thus far failed to alter the course of calcific aortic valve stenosis. The review paper notes that studies have demonstrated that statins, widely used for lipid lowering in atherosclerosis and inflammation, have no effect on calcific aortic valve stenosis progression or clinical outcomes, and might actually exacerbate the condition.
However, the researchers noted promise with Vitamin K2, specifically the long-chain menaquinones (MK7) a particular form of K2, as they are transported efficiently beyond the liver. “Vitamin K supplementation is an attractive option to replenish vascular vitamin K stores to ensure optimal calcification inhibition,” the researchers wrote.
“This review is so very significant,” says Dr. Hogne Vik, chief medical officer with NattoPharma ASA, world leaders in Vitamin K2 research and development. “Recognizing that medical therapies are proving ineffective, researchers are shining a light on efficacious supplemental alternatives, which leads them to the clinical research that NattoPharma has spearheaded. Specifically, our three-year cardiovascular study in healthy postmenopausal women taking just 180 mcg daily of Vitamin K2 as MK-7 (as MenaQ7), which demonstrated a cessation and even regression in arterial stiffness.
“The relevance of our three-year study has resulted in several studies by the medical community for patients with existing coronary artery calcification, aortic valve calcification, and peripheral artery calcification,” adds Dr. Vik.
The review paper concluded: “The pathophysiological mechanisms involved in calcific aortic valve stenosis initiation and progression are being rapidly made clear and include inflammation, fibrosis, and calcification. With this advancing knowledge, we have identified novel therapeutic targets like vitamin K and new imaging techniques that can be used to test the efficacy of novel agents and further inform our pathophysiological understanding.”
At Botanica Medica our Naturopaths are well aware of the importance of  exercise, a good diet, supplementation (when needed) and the effect it can have on your life both physically and mentally. They come across lots of interesting studies and are always updating their knowledge. If you would like to make an appointment with one of our Naturopaths call Botanica Medica on 8271-1827 today. They are only to happy to share the knowledge they have gained through their studies and patient outcomes, and get you feeling better. Botanica Medica is located at 97 Glen Osmond Road, Eastwood and appointments are available Monday to Saturday including some after hours.
References:   Peeters FECM, et al. Calcific aortic valve stenosis: hard disease in the heart. Euro Heart J (2017) 0,1-8. Knapen MHJ, et al. Menaquinone-7 supplementation improves arterial stiffness in healthy postmenopausal women: double-blind randomised clinical trial. Thrombosis and Haemostasis (2015) 19;113(5).
OSLO, NORWAY and EDISON, NJ – (November 21st, 2017)
Graphics – created in Canva