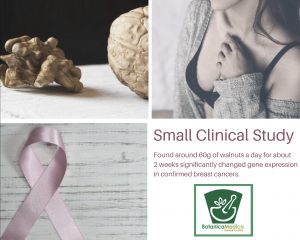 In a small clinical study, investigators from Marshall University School of Medicine found that the consumption of 60 grams of walnuts per day for about two weeks significantly changed gene expression in confirmed breast cancers. The findings from the study were published recently in Nutrition Research through an article titled “Dietary walnut altered gene expressions related to tumor growth, survival, and metastasis in breast cancer patients: A pilot clinical trial.”

“Consumption of walnuts has slowed breast cancer growth and/or reduced the risk of mammary cancer in mice,” explained lead study investigator W. Elaine Hardman, PhD, professor in the department of biomedical sciences at Marshall University.  “Building on this research, our team hypothesized that walnut consumption would alter gene expression in pathologically-confirmed breast cancers of women in a direction that would decrease breast cancer growth and survival.”

This pilot, a two-arm clinical trial, is the latest in a series of related studies at Marshall University related to dietary walnut links to tumor growth, survival, and metastasis in breast cancer. In this first clinical trial, women with breast lumps large enough for research and pathology biopsies were recruited and randomized to walnut consuming or control groups. Immediately following biopsy collection, women in the walnut group began to consume two ounces of walnuts per day until follow-up surgery. Pathological studies confirmed that lumps were breast cancer in all women who remained in the trial. At surgery, about two weeks after biopsy, additional specimens were taken from the breast cancers.

The researchers reported that the changes in gene expression in the surgical specimen compared to baseline were determined in each individual woman in walnut-consuming (n = 5) and control (n = 5) groups. RNA sequencing expression profiling revealed that expression of 456 identified genes was significantly changed in the tumor due to walnut consumption. Ingenuity Pathway Analysis showed activation of pathways that promote apoptosis and cell adhesion and inhibition of pathways that promote cell proliferation and migration.

“RNA-Seq Expression Profiling analyses from a pilot clinical trial in which women with breast cancer consumed two ounces of walnuts per day for two to three weeks between the diagnostic biopsy and subsequent surgery showed that gene expression in the tumor was modified in ways expected to slow proliferation, reduce inflammation, reduce metastasis, and to increase cancer cell death,” the authors wrote. “It seems likely that if gene expression was modified in the tumor due to consumption of walnuts, then gene expression of any metastatic cells should also be modified thus decreasing risk for cancer recurrence.”

At Botanica Medica our Naturopaths are well aware of the importance of  a good diet and the effect it can have on your life both physically and mentally. They come across lots of interesting studies and are always updating their knowledge. If you would like to make an appointment with one of our Naturopaths call Botanica Medica on 8271-1827 today. They are only to happy to share the knowledge they have gained through their studies and patient outcomes, and get you feeling better. Botanica Medica is located at 97 Glen Osmond Road, Eastwood and appointments are available Monday to Saturday including some after hours.